I recently watched a spiritual video on YouTube that was all about rejoicing, praising the Lord, being grateful for being alive and all the good things in your life, past, present, or future.   The video was by a charismatic Christian and I was originally put off by the display; it was over the top.   I couldn’t relate to it.   But after listening to Sister Sharon (Firm Foundation Radio Ministry) for a while, I realized that she was expressing her true faith, her connection with God.   She had incredible energy and it was wonderful to be in her presence.

There has been nothing in my practice that even approximates the energy that she had.   And I realized something.   To successfully counter the influence of the ego-mind and all the emotions we have in response to the things we experience consistently, it would be extremely helpful to have that energy, that joy as part of our being, our spiritual life.

I certainly couldn’t see myself doing what she did.   But I tried reaching back into my background to find something that had a similar energy, in a prayer-like setting, that I would therefore be able to do and feel natural doing it.

In one of my meditation images, I visualize me joining hands with my true Buddha self (the toddler) and my unborn Buddha mind on the “other shore” and dancing a joyful Jewish dance I learned as a child/adolescent.   As I was searching for something in my past, that experience came to mind, and specifically one song we would sing as we danced the Hora – Hava Nagila.   It certainly had the right energy,  And when I looked up the lyrics, found that they translated as (which I never knew), “Rejoice and be happy, sing and be happy, awake my brothers and be happy.”  I couldn’t have found anything more appropriate.

And so now, at the end of my morning meditation, before I get off my cushion, I sing Hava Nagila.   What a wonderful way to start my day.   And come back to it throughout the day.   I also have connected with Sister Sharon’s energy numerous times.   A real blessing.

When you are in this space, you are able to experience the benefits of faith being one with mind and mind being one with faith.   Here there is no yesterday, no tomorrow, no today, there is only the present moment.   This is the only reality; all else is thought.

And when you are in this space, there isn’t a felt need to manifest anything because you are filled with joy and gratitude and faith.   But it you do manifest, it will be coming from a pure place; your heart not your ego-mind.

Actually, one morning recently when I woke up, the words of Hava Nagila instantly came to mind, and I couldn’t believe what popped out of my mouth next, “I manifest abundance and know that I will want for nothing.”  It felt totally natural coming from within me.   And as a manifest should be, it was totally undefined, unspecific.   What that abundance will entail, how it will come about, what “I will want for nothing” means – it could mean that I have so much money that I can have anything I want or it could just as well mean that I will be in a spiritual place where my wants are modest or nonexistent.

And this manifest, as compared to other manifests, did not provoke any push back from my ego-mind, at least not initially.   It did later in the day, questioning how I could achieve abundance financially given my circumstances.   It took me out of my energized space and slapped me down.   Only the next morning when I meditated was I aware of what had happened and said “no” to my ego mind and returned to my heart, my faith, and to Sister Sharon’s energy.

One of the fears that all of us have is being alone– particularly in an irreversible existential sense. So for instance, we fret that if our enjoyed one passes away, and we have no close household, that we will be alone, not simply in the sense of not having somebody to provide assistance, particularly in aging, however not having anybody to speak to, to share one’s sensations with.

When I was at Shambhala when, somebody asked the instructor what to do when whatever breaks down. The instructor stated that your self, your real Buddha self, will talk to you and state, “You are not alone.   I am here to help you. “

Since I do think that I have a real Buddha self within me, I believed just recently why not develop a relationship with my self? Why await catastrophe to strike? Why wait till you desire assistance from your real self?

In your self, you genuinely have a pal. And a pal who will constantly exist. I never ever had a fictional pal as a kid, as many kids appear to do. Despite the reality that I was frantically in requirement of pals, that I understood that I was not liked by lots of, I think I did not even have the creativity that some fictional individual might be my continuous buddy and pal. Or maybe I was simply doing not have in creativity, which I believe was more the case.

But that is the past. Although today I feel that I still have little creativity in that notice. So this will be a genuine difficulty, to develop a relationship in between my real Buddha self (the avatar of which is me as a young child) and me.

Interestingly, this belongs to one of the ideas I had when I reworded my youth story. In that narrative I developed a fictional pal to keep me business and play when I was left alone in the evening.

And what I am finding is that due to the fact that I am speaking with a young kid, a young child, my interaction is filled with the happiness and marvel and energy that you would interact when speaking with a kid; really various from speaking with a grownup. And so I am in impact experiencing things now through the eyes of that innocent kid.

In so doing, I am raising myself from the ordinary, strained aircraft through which we usually experience daily life and rather am seeing things through the eyes, the aircraft of my Buddha self, my magnificent essence. This is genuinely providing myself happiness, experiencing happiness.

At some point, my real Buddha self will share its observations and ideas with me. Although the possibility is strong that he currently does this, however I am not mindful that he is the source of my own observations. Indeed, if these observations originate from my heart and not my ego- mind, then they would be originating from him. 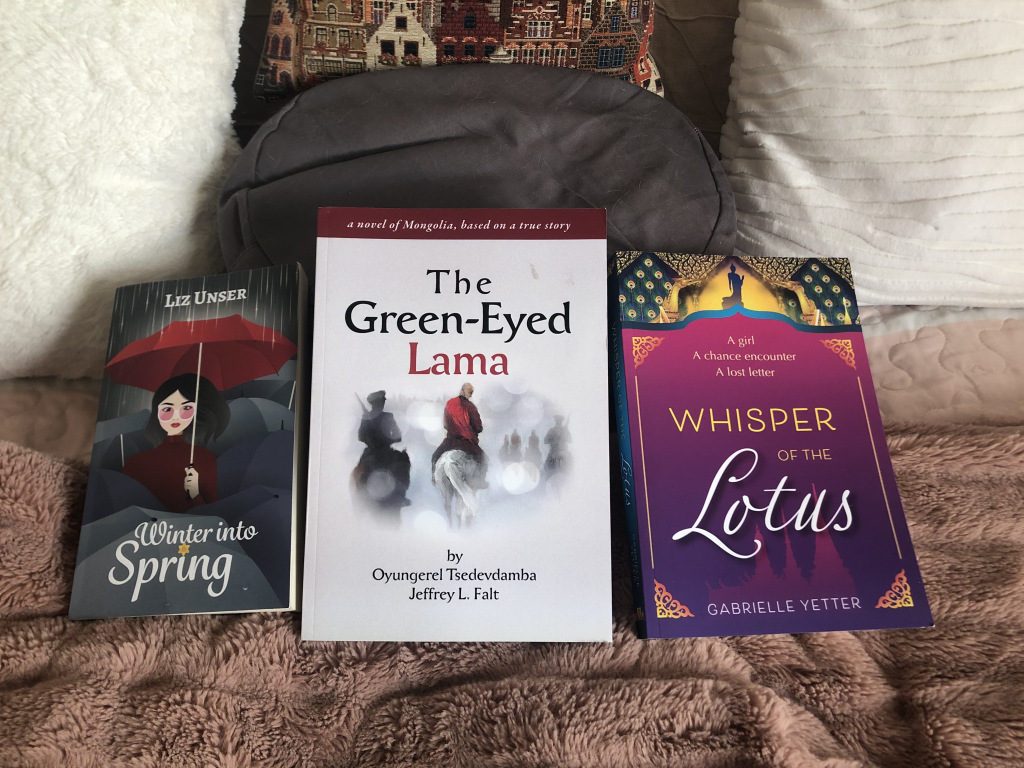 Hello Buddhist fiction readers. By a happy accident, I have double copies of three books I intend to review for this blog. Instead of returning them, I thought it would be fun to offer to send a book to anyone who would like to read and discuss it with me, thereby contributing to the review.

I hope to post reviews of these novels starting in April, 2021. Please email me at buddhistfictionblogger@gmail.com if you would like me to send you a book from the three depicted below. First come, first served.

Amazon blurbs for each book are listed below the picture.

Amazon Blurb: “”THE GREEN-EYED LAMA” IS THE BEST NOVEL EVER WRITTEN ABOUT MONGOLIA” (JACK WEATHERFORD)THE FIRST MONGOLIAN NOVEL EVER PUBLISHED IN THE WEST!AN AWARD-WINNING, DECADE-LONG BESTSELLER IN MONGOLIA.The year is 1938. The newly-installed communist government of Mongolia, under orders from Moscow, has launched a nation-wide purge. Before it ends, nearly a tenth of the country’s population will be murdered.A young nomadic herds-woman named Sendmaa falls in love with Baasan, a talented and handsome Buddhist lama. Baasan resolves to leave the priesthood and marry Sendmaa, but her scheming neighbor persuades Baasan’s brother, Bold, to ask for Sendmaa’s hand in marriage first. Their love triangle is engulfed by tragedy when Mongolia’s Stalin moves to crush the Buddhist faith.Baasan is arrested. Sendmaa, Bold, and the other northern herders are branded counter-revolutionaries, and their herds are confiscated.As the country teeters toward war, Baasan is sentenced to death as a class enemy. But an improbable ally, a lama turned “KGB” agent, intervenes in a way that reaches all the way to Franklin Roosevelt. Still, Baasan must summon every bit of his talent and ingenuity if he’s to survive the gulag, reunite with Sendmaa, and help save the Buddhist faith.The Green-Eyed Lama is based on a true story. Nearly all of the book’s characters are referred to by their real names. Written originally in English, it was published in Mongolian in 2008, and has been a bestseller in Mongolia for 10 years. The Green-Eyed Lama is the first Mongolian novel to be published in the West. In November 2017, the French publishing house Grasset Editions published the novel in French under the title Le Moine Aux Yeux Verts.”

Amazon Blurb: “Elin Petersen knew that she was fortunate; dreamy husband, stunning home, plenty of friends and plenty of money. Who caused it all to come crashing down? How could she deal with the loneliness, money worries and failed relationships that followed? Elin’s wake-up call comes in the guise of new friends Mia, Chrissie and Cecilia. They enjoy life, love, dancing and fun and suggest that Elin could change the part she plays in the drama of her own life.She lands a great new job. But career satisfaction and financial security come with a complication, a drop-dead gorgeous father of two, an enigma who doesn’t talk about his wife.Finally understanding that happy endings don’t come neatly packaged, Elin heads off to the next challenge, fully aware that she must make her own happiness along the way.Winter into Spring interweaves life struggles with musings on female friendship and practical Buddhist philosophy.”

Whisper of the Lotus by Gabrielle Yetter. Independently Published, 2020.

Amazon Blurb: “A buzz sounded from inside Charlotte’s handbag, so she stopped and fumbled for the mobile phone she’d switched on after landing. Surely nobody would be contacting her here.
Her fingers curled around it and she flipped open the case and checked the message: Welcome to Cambodia, Charlotte. You have 57 days

Sometimes you have to go a long way from home to come full circle back to discover what was right in front of you..
Charlotte’s mundane, dead-end life lacked excitement. She never imagined that sitting on a plane to Cambodia, struggling with her fear of flying, would lead to her being befriended by Rashid, an old man whose tragic secret would take her on a mystery tour of discovery.

In a land of golden temples, orange-clad monks, and smiling people, Charlotte discovers nothing is as she’d expected. She also never imagined the journey would take her back to the night when her father walked out on the family.
And who was Rashid? Was he just a kindly old man, or was there something deeper sewn into the exquisite fabric of his life?

From the author of The Definitive Guide to Living in Southeast Asia: Cambodia and Just Go! Leave the Treadmill for a World of Adventure, Whisper of the Lotus is a multi-layered story about friendship and family, love and identity, set in an exotic, magical country in Southeast Asia.”