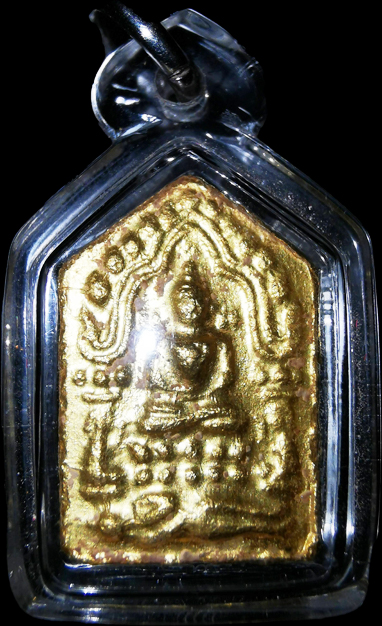 Special edition gold foil khun paen for ultimate success and love relationship, made with pong prai kuman.  A very powerful piece, and a rare piece you can no longer find.

There are only 3 pieces made since year 2514,  – This is a special edition from master’s collection of one of the best and well kept Khun Paen Amulet.

This special piece was given to  master almost 20 years ago, 2 pieces were in his possession. One of the pieces was taken by a local follower 5 years ago and the donation was made towards various charity causes. Master did not reveal who was the original maker of this khun paen amulet, followers who are familiar with Khun Paen amulet may know its origin. Master was waiting for someone who is willing to donate and help charity causes. This piece will help the owner with many great successes in life.

Guaranteed to be one of the most powerful Khun Paen Amulet, and has gone through 20 years of full moon and new moon rituals which you can’t find anywhere else.

– Completed 20 years of the full moon and new moon merits and rituals. – Powerful accumulation of the energies of the stars.
– Success and spiritual guidance towards business.
– Powerful attraction from the high powers and merits of prai kuman.
– Attraction of love and opposite sex, achieving towards success.

Khun Paen is a master in mantras or formulas with supernatural power. He had magical knowledge. He used magic to make himself invulnerable and unseen to enemies, transforming his body into other forms, putting everyone else to sleep and converting sheaves of grass into invincible spirit warriors. Khun Paen also uses love formulas to captivate women and having the skills to ease anger.

Khun Paen was a Great General of the military, a time when supernatural forces played an important part of traditional warfare. Khun Paen had wanted a protective spirit to watch over him in battle. To this end, he cut open the body of his dead wife’s and took the fetus out and set up a shrine to perform his magical powers. He wrapped the child’s torso in sacred cloth. He roasted it on fire into a dried corpse, while chanting ritual mantras and dark incantations for 49 days to create the supernatural being with whom he could communicate, and control the spirit so that he could command it to do anything for him.

Khun Paen was the first person who created Kuman Thong. Based on the legendary descriptions, Khun Paen was chanting some sacred mantras to activate his son spirit while burning the dead baby on the fire. Kuman Thong defended his father against enemies, evil spirits, gambling, cockfighting, and many more.

From the above miracle Khun Paen story, many masters or guru monks like to make Khun Paen as a charming and Metta (love and attraction) amulets. According to some comments and reviews by the masters and guru monks and local Thai people, Khun Paen amulets generally is best for:

●    Ability to attract the opposite sex naturally.
●    Get to be liked, trusted, respected and admired by everyone.
●    Get to develop indestructible confidence and courage.
●    Easier to ask for favour and help.
●    Gain the “upper hand” in business or career.
●    Excellent luck and great charm.
●    Victories in all aspects of life.