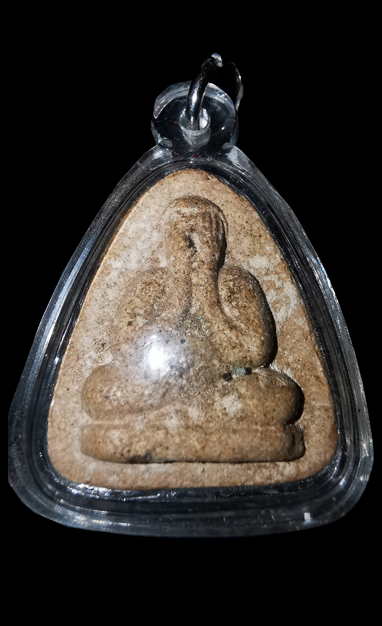 Remove Obstacles and Bring Upon Positive Changes in Your Karmic Path

Phra Pidta Amulet consists of “Phra” means monk, “Pidta” means eyes closed. This amulet is a symbol of the deepest meditation, in which one is closed off to all external influences and sees with the internal eye only.

Phra Pidta is a representation of a venerable monk well known for deep samadhi meditation (absorption) during Siddhartha Buddha’s time more than 2,550 years ago.

His hands over the eyes symbolize a blocking out of the outside world during intense Sammabart meditation. This is jhana level meditation which can also cross-over into Abhinna. Abhinna are supernatural experiences which people meditating in the fourth Jhana can sometimes attain. The Pidta style amulet with a monk sitting in a full or half-lotus position and with his hands covering his eyes and face is a style that has become very popular among Thai Buddhists.

The Phra Pidta hides its eyes. Meaning of Close the Eyes Buddha is when we stop concerning, asking and caring something, nobody can do any bad things to you. Yet, there are said to be many benefits of the amulets including good luck, increase their wealth and protection from harm of all sorts.

Phra Pidta is known to bring fortune. It is also known to keep one safe from evil. Usually, those who engage in high-risk occupations or work under dangerous circumstances are more likely to opt to wear Phra Pidta amulet.

The meaning of the closed eyes in Buddhist philosophy describes this as imagery that one is not exposed to the evil around. One is also not concerned about evil and its wrongdoings. Hence, one doesn’t indulge in the rumours, foul mouthing, nefarious acts and any kind of crime. One remains immune to villainous acts and thus one is protected from all kinds of misgivings and ill-fortunes as a result.

Phra Pidta was one of the most trusted apprentices of Buddha. Before he became a monk, over several past life ago he was a kind, generous, humble and striving man. Throughout his life and eventually, as a monk, Phra Pidta was always forgiving, helpful, generous and wise. He helped others without any selfish intent and he did not mind risking his own self for the safety of others in danger. It is these heroic acts of Phra Pidta that turned him into a legend and his good acts that paved his way to heaven, thus attaining nirvana.

A Phra Pidta Thai amulet is thus regarded as one of the most generously blessed items in Buddhism.