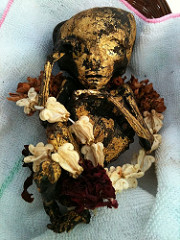 In olden days, the black magic to consecrate luk kok is by making use of spirits of children or babies who died prematurely.  They were controlled by a strong form of black magic that make them slaves to their masters, and there are mantras that can control their minds to command them and mantras to cause them to suffer in pain if they do not abide by the command. Their energy and strength usually come from raw food and blood. The fresher the blood or meat the better it is for them to absorb the energy because there are still strong energies of spiritual energy in fresh meats and blood.

Master’s luk kok and kumantong are specially chosen spirits, only spirits who have gained good spirituality from their last life are accepted for the consecration. Master will first deliver merits to these spirits through forms of ancient lanna magic, this form of ritual helps them to transcend to higher Asura realms where they have access to many levels of higher wisdom and abilities. These spirits have also gained high clarity of their own existence, and had also gained high spirituality through master’s incantations, and chanting.

When these spirits are in the Asura Realm, the clarity of their mind also gives them many levels of supernatural powers. They can access anyone’s akashic records (past karma) and give clear spiritual guidance to their owner, they will have the ability to protect their owners from enemies, influence the minds of others that can help change one’s destiny. They are known to be 100x more powerful than any form of spirits from the Ghost realm because of their high spirituality and access to the wisdom of many levels of supernatural powers.

The main difference of Master Patana’s luk kok and kumantong

According to master, every person is governed by karma and energies of a total of 12 dimensions. If good and positive energies fill all 12 dimensions, one will be able to have the power to get any desires they want.

A luk Kok can help the owner with altering 6 spiritual dimensions and has the ability to advance another person’s negative karma,  and a kumantong do not have the ability to do so due to the precepts accepted during the consecration. Although both forms of spirits belong to the realm of Asura, they do have differences in their spirituality,  spiritual age and wisdom. It is not based on the age of their deaths, but the age of their souls and spirituality, wisdom accumulated from the number of rebirths they have gone through.

A luk kok can advance a target’s negative karma in order to protect their owners who are contributing merits for their spiritual growth. Everyone has accumulated both good and bad karma, and a luk kok will have the ability to advance one’s existing negative karma in order to put a stop to any of their ongoing negative actions in order to protect their owner. However, if the negative actions towards a luk Kok’s owner are due to past karmic reasons, they can help reduce the impact of the effect. And advancing another person’s negative karma, may also help the other person to gain spirituality.

Many regarded this as a form of curse towards luk kok owner’s enemies, but this works in a good way that does not backfire to the owner.