The following points highlight the six important teachings of Mahavira. The teachings are: 1. Belief in Soul and Karma 2. Nirvana 3. Non-Belief in God 4. Rejection of Vedas 5. Ahimsa 6. Freedom to Women.

Teaching # 1. Belief in Soul and Karma:

The soul can be released from the bondage by getting rid of passions. He believed that the soul could be finally liberated only by the disintegration of Karmik force. According to him with the decay of the karmas the intrinsic value of the soul can be highlighted and the soul shines in full luminosity. When the soul attains infinite greatness it becomes Paramatma, the pure soul, with infinite knowledge, power and bliss.

The chief object of life according to Maha­vira is to attain salvation. He therefore insisted on avoiding evil Karmas, prevent all kinds of fresh Karmas and destroy the existing ones. According to him this could be attained through five vows viz., non-injury (Ahimsa), speaking truth (Satya), non-stealing (Asteya), non-adultery (Brahmacharya) and non-possession (aparigraha).

In addition to taking these five vows he also insisted on principles of right conduct, right faith and right knowledge. Right conduct implied a dispassionate attitude towards senses. He said that we must treat the sufferings and happiness on equal planks.

Right faith meant belief in the Jinas and right knowledge meant the knowledge of the eventual liberation. The above vows and princi­ples were meant for the householders. The Monks etc. had to follow a more severe code.

Mahavira did not believe in God nor did he believe that He created the world or exercised any personal control over it. According to him the world never comes to an end. No matter ends, it simply changes its form. Since the universe is also composed of certain matters it simply changes its form. We clearly find the influence of the Sankhya philosophy as far as this principle is concerned.

Mahavira further believed that the emanci­pation of man does not depend on the mercy of any outside autho­rity. The man was the maker of his own destiny. While leading a life of austerity and self-mortification man can get rid of his miseries and sorrows. According to Mahavira the best way to attain salva­tion is through renunciation.

Jainism also rejected the theory of the Vedas and attached no importance to the sacrificial rituals of the Brahmans.

Mahavira laid too much importance on Ahimsa. According to him all creatures, animals, plants, stones, rocks etc. possess life and one should not do any harm to the other in speech, deed or action. Though this principle was not entirely a new one, credit goes to the Jains that they popularized it and thereby put an end to the practice of various types of sacrifices.

Mahavira favoured the freedom of women and believed that they also had the right to attain Nirvana. In this respect Mahavira followed the example of his predecessor, Parsva Nath. Women were allowed in the Jain Sangha and many women became Sarmini and Sravikas.

It will be evident from the above teachings of Mahavira that he was more of a reformer of the existing religion rather than the founder of a new faith.

According to A. M. Ghatage,

“Jainism is thus a moral code rather than a religion in the modern western sense of the term. It recognised no Supreme Being, but there was a whole galaxy of deified men who had been spiritually great. Every soul possessed the potentiality of becoming as great as they. And if the necessity arose Jainism was not unwilling to admit a God of popular Hinduism to this galaxy. Besides it was also not opposed to the theory of’ caste. It was thus very much less hostile and more accommodating to Hinduism than the other heterodox systems. It must also be remembered that Jainism did not dogmatise. According to its fundamental logic, no absolute affirmation or denial was possi­ble. When all knowledge is only probable and relative your oppo­nent’s view is as likely to be true as yours. The result of this spirit of accommodation was that Jainism has survived in India till today, whereas, Buddhism. its twin sister, had to look for habitation else­where.” 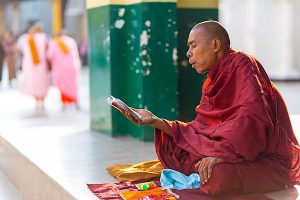 Sutras: 10 Helpful ways to enjoy and learn more from reading Buddhist Sutras; tips for creating your own Sutra-Sutta reading club

Over 2,500 years in the past, Siddhartha Gautama had a collection of profound realizations that led him to develop into the Buddha, the Awakened One.